Waters is a frequent Trump critic who has pressed for the impeachment of the 45th president. During a October 21, 2017 speech, Waters declared that she seeks to "take out" Trump.

Navarro, quickly took to Twitter to decry Waters' comment. He declare that the "Secret Service should call for Maxine Waters immediate resignation after these comments." In another tweet, Navarro wrote, "Let’s arrest her."


Navarro's bid is also assisted by the Citizens for Responsibility and Ethics in Washington's announcement that Waters is "one of the most corrupt members of Congress." They wrote,

In the midst of a national financial catastrophe, Rep. Maxine Waters (D-CA) used her position as a senior member of Congress and member of the House Financial Services Committee to prevail upon Treasury officials to meet with OneUnited Bank.  She never disclosed that her husband held stock in the bank.


This scathing criticism against Waters is made even more legitimate by the fact that CREW is a liberal cause funded by progressive donors.

Far from being a corrupt politician who seeks to "take out" the leader of the free world, Omar Navarro is a private-sector businessman who "works with Fortune 500 companies," according to his campaign website. The write-up regarding Navarro continues, reading,

Omar is a Washington outsider, who has lived in Inglewood, Hawthorne, and Torrance. Omar is running because he wants to give the people of the 43rd an independent voice in Congress–not one beholden to special interests and career politicians.


Navarro's cause was advanced by longtime GOP political consultant Roger Stone, who heartily endorsed him and has publicly spoke in favor of his campaign. Navarro is also endorsed by 2012 presidential candidate Herman Cain.

According to a Twitter poll posted by FDL Review, the momentum is on Navarro's side. 60 respondents chimed in. A whopping 87% of them said that they would vote for Navarro in the election between him and Representative Waters. 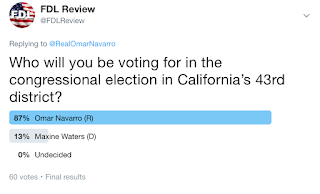