December 01, 2018
George Herbert Walker Bush, the 41st president of the United States and the father of the 43rd, passed away Friday at age 94.

Bush will be remembered for his successes as the nation's chief executive, which included overseeing the collapse of Soviet Communism and securing an impressive victory in the Gulf War of 1990-1991, as well as his personal humility, nobility, and commitment to public service.


Bush -- a Navy lieutenant during World War II -- was a member of the Greatest Generation, and for today's America, he was a man of a different era altogether. When Bush won, it was with humility; when he lost, it was with dignity; and when the "other side" delivered for America, he saw it as a success for his country rather than a failure for his camp.

For evidence, one simply needs to look at Bush's 1993 letter to former President Bill Clinton, who defeated Bush in the 1992 election: 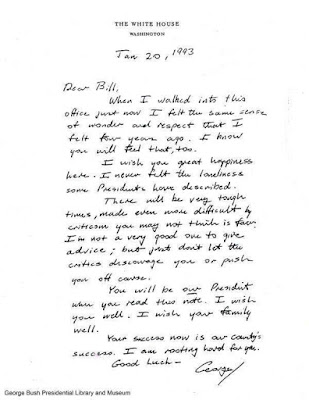 Bush, who played his cards right but lost the Electoral College thanks to the presence of right-wing populist candidate Ross Perot, could have picked spitefulness. Instead, he chose the high ground, endowing onto his successor a blessing in the pursuit of what was right for the republic.

This type of graciousness is unheard of today, making the elder Bush's passing all the more sorrowful. It is unimaginable to think of Barack Obama writing to Donald Trump that "I am rooting hard for you." Just the same, could you imagine Donald Trump writing that to a Democrat successor if he loses in the 2020 election?

For Bush, however, this wasn't a one-time show; it was a part of who he was.

Bush certainly didn't transcend partisanship (he was a Republican all the way), but he occupied military, diplomatic, bureaucratic, and political offices not for the advancement of himself and his party, but because of his commitment to the betterment of the republic. Better yet, Bush didn't see demagoguery, character assassination, and vitriol as a prerequisite for success.

In his 1989 inaugural address, Bush outlined his philosophy of service, saying,

I have spoken of a thousand points of light, of all the community organizations that are spread like stars throughout the nation, doing good. ... I will go to the people and the programs that are the brighter points of light, and I will ask every member of my government to become involved. The old ideas are new again because they are not old, they are timeless: duty, sacrifice, commitment, and a patriotism that finds its expression in taking part and pitching in.


While Bush was specifically speaking of the importance of volunteering, his service in public office -- along with his lifetime commitment to the betterment of the American community -- showed "duty, sacrifice, commitment, and a [sense of] patriotism."

For that reason, no piece of writing better embodies George H.W. Bush than this paragraph from his inaugural address.

However, words -- even if they immortalize the great -- are completely useless if not appreciated and acted on. Our current crisis of hyper-partisanship would be solved if we realized that we are far better off with more public servants like George H.W. Bush, and fewer politicians interested in self-advancement and political theater.

It is in our power to make Bush's "old" values "timeless," as he asked of us in 1989. The question is whether we can set aside our tribal instincts and embrace leaders who exemplify American exceptionalism (as opposed to the exaggerated instincts of our faction).

Rest in piece, Mr. President -- I hope that we can make you proud.