October 26, 2019
On Friday, the U.S. federal deficit hit a seven-year high. The New York Times responded to the news with an editorial from Alan Rappeport, who says that President Donald Trump "has allowed deficits to balloon by enacting sweeping tax cuts and increasing government spending." Rappeport expounds on this claim by writing,

The deficit is growing in large part because tax receipts are falling, as Mr. Trump’s 2017 tax cuts continue to siphon revenue from the Treasury. The numbers reflect the fact that Mr. Trump’s most significant legislative achievement is not paying for itself, as Republicans have said it would. In fact, tax revenue for the last two years has fallen more than $400 billion short of what the Congressional Budget Office projected in June 2017, six months before the tax law was passed.


However, this take is not accurate. The deficit is skyrocketing because of rapidly-increasing federal spending, not because of a decline in tax revenues. In fact, tax revenues are on an upward trend, as The Wall Street Journal reports:


For those who do not believe in the transformative power of free enterprise, the increase in government revenue would come as a shock. However, for adherents of supply-side economics, they are only a reaffirmation of a mindset that was previously affirmed by the results of Presidents Calvin Coolidge and Ronald Reagan.


Coolidge substantially reduced tax rates in the 1920s. Instead of causing a precipitous decline in federal revenues, these cuts triggered a period of economic expansion that parlayed into stable receipts for the government. I created a graph to illustrate this phenomenon: 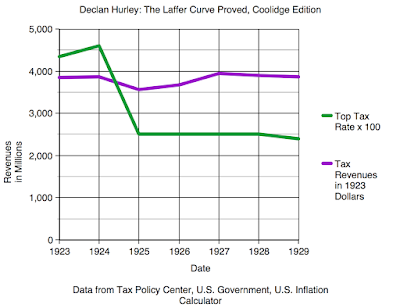 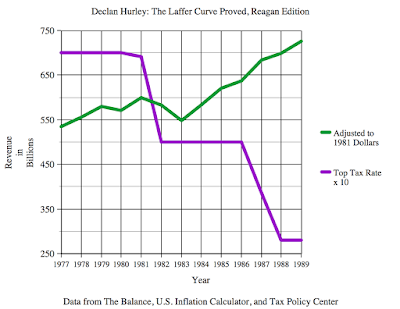 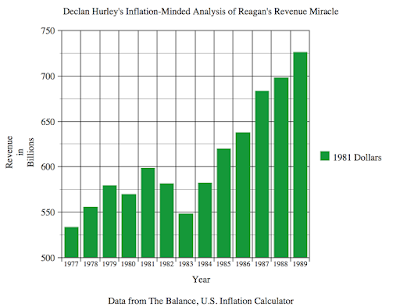 Fast forward to Donald Trump's presidency. Yes, Trump cut taxes and budget deficits are very high, but correlation does not imply causation. The deficit culprit is not tax reduction -- which allows Americans to keep their hard-earned money and spend it more efficiently -- but instead profligate spending. The Journal notes,

Higher tax revenues weren’t enough to offset federal spending. Increases in interest rates and a bigger government debt load pushed up interest costs by 10%, to $573 billion. Medicare spending also rose 10% to $783 billion, due to rising enrollment and higher health-care costs, a senior Treasury official said, and spending on the military climbed 8%, to $654 billion.


Even The Times' Rappeport concedes, "In the year through September, the pace of government spending has grown twice as fast as that of tax revenue, with higher outlays on Medicare, Social Security and military spending" (emphasis mine). In other words, tax revenues are growing but government spending is growing even faster.

Common sense would point to a policy of fixing government spending to revenues. However, common sense is rarer than the dodo bird in today's Washington and our feckless politicians don't have the moral courage to arrest budgetary extravagancy. They prefer to rob John Q. Taxpayer and the corporations that provide our nation with jobs and second-to-none consumer products.

Tax cuts are a sound policy that permit steady growth in government revenues. As for government spending, the Washington establishment would be wise to listen to Calvin Coolidge: "The collection of any taxes which are not absolutely required, which do not beyond reasonable doubt contribute to the public welfare, is only a species of legalized larceny."